Although the new model has been released, although the appearance of this old model is not so fashionable and beautiful,

But the design is compact and practical, and it is also very popular with old users.

Many users will repurchase several sets for relatives and friends

The chemical properties of these elements are very active and have strong oxidizing effects. They are strong oxidants, which can oxidize all the photosensitive decomposition products of organic matter into volatile and harmless gases suchas water vapor（H2O）and carbon dioxide（CO2）achieve the purpose of completely removing pollutants

So the characteristics of this machine are: powerful, fast and thorough: 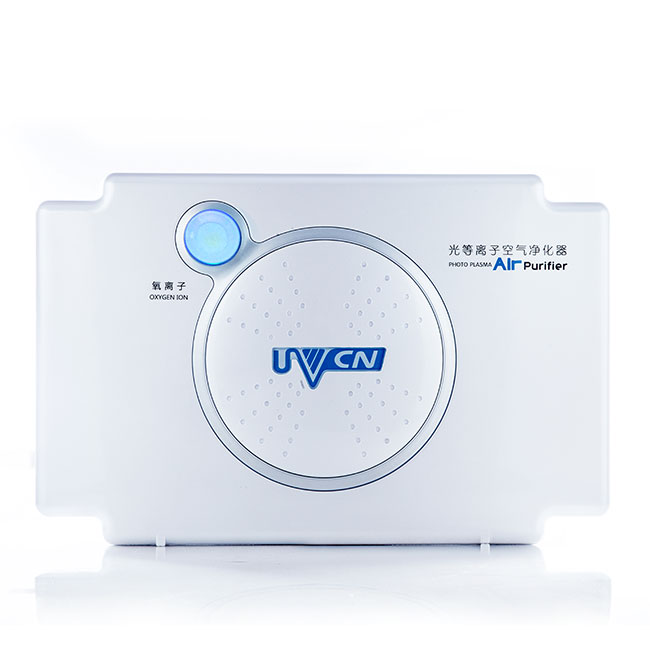 UV1000 was designed to protect medical staff during the SARS period in 2003. It has a white cross shape. It was launched in 2005 and applied for a national patent for optical plasma.

What we see now is a batch of UV1000 light plasma purifiers re-produced in 2013.

In order to be portable and easy to use, the core components of the UV are specially compressed, with low power consumption, small size, and very practical. 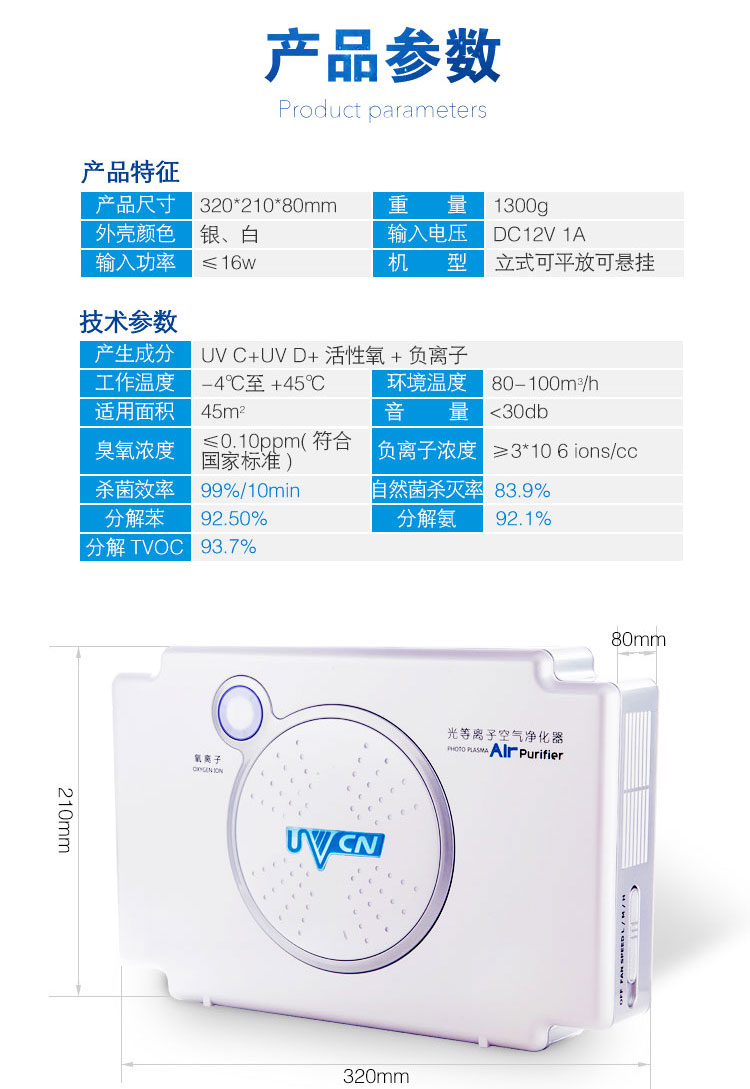 The purifier of UV1000 has 2 purification modes,

254 wavelength ozone-free ultraviolet sterilization and disinfection, as well as the additional function of negative ions. In this mode, man-machine coexistence is always open for 24 hours.

The oxygen ion button on the panel controls the purification mode of 185 short-wave ultraviolet.

After pressing, the circular button turns blue, and 185 short-wave ultraviolet will produce ozone,

After this button is turned on, the two UV wavelength purification modes are turned on at the same time.

The purification speed and effect is very thorough and fast.

The usage time in this mode needs to be flexibly controlled according to the environment. Under normal circumstances, places with severe epidemics and poor air environment can be opened for a long time.

3. How to use active oxygen

The usage of active oxygen is adjusted according to space and environmental changes.

If the environment is poor, there are many viruses, and there are many people, you can open it several times a day according to the situation, and you can also treat it for 10 minutes each time.

There is pure ozone in the ultraviolet active oxygen, and ozone will neutralize and disappear in the process of decomposing with toxic and harmful gases.

That is to say, if you are in an environment with many people, poor environment, dirty air and peculiar smell, then if the concentration of ozone produced by ultraviolet rays is the same as the composition of your harmful gas, the two will be offset during the decomposition process, and you will smell There is no odor or smell of ozone. The most intuitive way to measure the quality of the air is that you can smell the air is particularly fresh and clear, without any peculiar smell.

An appropriate amount of pure ozone is beneficial to the human body, and the air will be particularly fresh and comfortable.

The environment is the most complex. The environment of each family is different. The air flows and the environment is constantly changing. Therefore, there is no fixed definition. How long must the oxygen ions be turned on? Be sure to leave the room. In many cases, it is possible. Human and machine coexist.

This oxygen ion mode is an optional enhanced function button for the uv1000 model. You can choose the length of time to turn on according to your needs. Experiment with different environments a few times to learn what works for you.

It is recommended that the first time you receive the purifier, you can test the different concentrations and feelings of oxygen ions in different environments.

Everyone's acceptance of the smell of ozone is also different. Some people like it and others are sensitive. It can be flexibly controlled according to personal preferences.

This machine has two modes, the default mode is no ozone mode, no need to leave people, the sterilization effect is also very good, the ozone mode is for strong sterilization, deodorization, 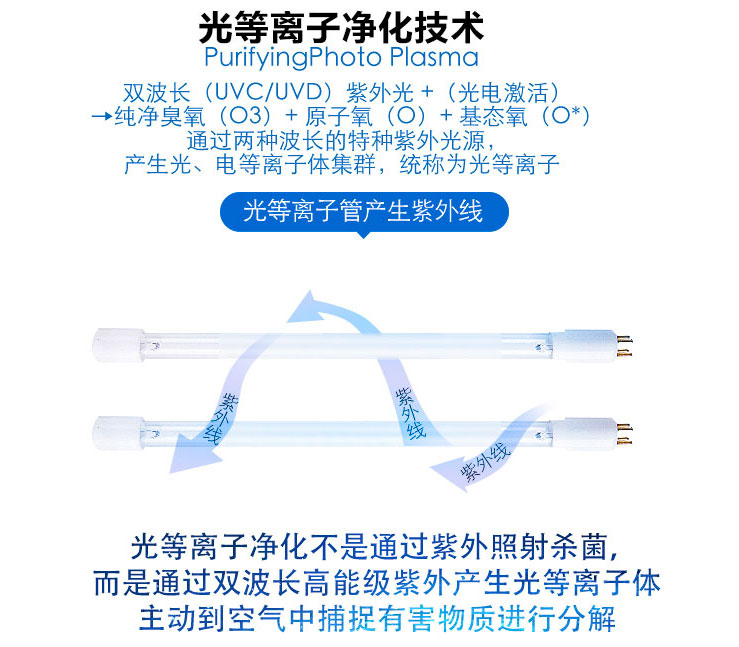 Through the special ultraviolet light source with two wavelengths, a series of strong sterilization and disinfection light and electric plasma clusters can be generated, collectively referred to as light plasma

The chemical properties of these elements are very active and have a strong oxidizing effect. They are strong oxidants, which can completely oxidize the photosensitive decomposition products of organic substances and turn them into volatile and harmless gases such as water vapor (H2O) and carbon dioxide (CO2), which can completely the purpose of removing pollutants.

The traditional method of generating ozone with high-voltage air discharge will produce nitrogen dioxide (NO2) along with it. NO2 is a toxic gas and cannot be easily eliminated. This method has been abandoned in sterilization and disinfection in household and other environments.

The optical plasma product uses the 185 nm ultraviolet spectrum to generate ozone, which completely avoids the generation of harmful gases, and is very safe. Therefore, compared with the traditional ozone generator ozone disinfection method, the speed of purification, sterilization and disinfection is not at the same level.，

In addition, the ozone produced by the traditional ozone generator is carcinogenic, so the harm outweighs the benefit, so we choose the optical plasma technology, which is efficient and safe.

6.The difference between traditional ultraviolet radiation disinfection and photoplasma: Ordinary UV lamp direct irradiation to kill viruses, can only target the surface of the object, because there is no circulation, can not do air disinfection,

And people can not be on the spot, general disinfectant and UV lamp disinfection can not do 24 hours uninterrupted disinfection.

Photoplasma technology is a comprehensive application of ultraviolet technology

Using high-energy UV and photoplasma flying into the air to sterilize,

No dead Angle can be achieved, the entire space including object surface disinfection,

And solve the problem of ultraviolet radiation, both efficient and safe Simply put, only high-energy UV light can be called a light plasma purifier, not an ordinary UV antivirus purifier, with a well-developed product design.

The 254nm wavelength can effectively kill bacteria and viruses. A lot of researches have been done before, and it is a fact that there is no doubt. The characteristics of ultraviolet sterilization are broad-spectrum. Some viruses that are difficult to destroy at high temperature can be quickly eliminated by ultraviolet rays. This is because the sterilization mechanism of ultraviolet rays is different from other disinfection methods such as drugs. Biological cells have the largest absorption of ultraviolet light waves in the 250-270 nm spectrum, and the absorbed ultraviolet rays mainly act on the nucleic acid, deoxyribonucleic acid (DNA), ribonucleic acid (RNA) of microorganisms, etc. The energy of ultraviolet photons is absorbed by the base pairs in them. Absorption, acts as photochemical, causes genetic material to mutate, and causes it to be destroyed, so that bacteria immediately die or cannot reproduce offspring, so as to achieve the purpose of sterilization.

Beijing Aerospace Hongda Optoelectronics Technology Co., Ltd. took the lead in mainland China to develop a new type of ozone ultraviolet germicidal lamp that adopts high-tech, which greatly enhances the intensity of the 185nm spectral line, and uses a new quartz glass tube to improve the penetrating ability of 185nm wavelength ultraviolet rays. Therefore, the ability to generate ozone is also greatly enhanced. The product has dual ultraviolet and ozone sterilization and disinfection functions, so it is named "super sterilization lamp" . When it is working, it turns O2 in the outside air into O3 (ozone) to achieve the purpose of sterilization and disinfection. After stopping work, because ozone is very active, it decomposes quickly in normal environment, transforms into oxygen, and updates the air without leaving any secondary residues, which is unmatched by any drug disinfection. Optical plasma purification technology has proven to be an excellent method of removing contamination from the air and surfaces. Compare by experiment:

When the ozone generated by corona discharge is used to remove biological contamination from the surface, it takes about 10 hours.

When corona discharge and UV light are used at the same time, it takes about 1.5 minutes to achieve the same cleaning effect.

When the optical plasma generated by UVCN purification technology is used, it only takes 20 seconds to achieve the same cleaning effect.

From our professional technical background. We all know that ultraviolet light can sterilize and disinfect, but most people feel a little scared when it comes to ultraviolet light, and worry about the problem of radiation. Optical plasma is the end product of ultraviolet technology application, not like the ultraviolet lamp in the hospital to sterilize by irradiation, in order to avoid ultraviolet radiation Exposure injury requires a very complex system design to lock the UV light inside the purifier, but to use the decomposition effect of the UV light without hurting people. This is a very complex, interdisciplinary and interprofessional comprehensive design. There are not many companies in the world that have mastered this technology. Optical plasma technology is not called optical plasma as many UV lamps are added on the market. Aerospace Hongda has mastered the application of ultraviolet technology research and development, from the core components of light source to the supporting ballast, air detection sensor,

Almost the entire industrial chain has been developed by itself, and it has reached the world's leading level in many fields.

Various disinfection usages of users' purifiers during the epidemic

Used to sterilize masks, as a small disinfection cabinet Because a boot, the air around the purifier is particularly crisp, cats are very sensitive

Many old users become our ultimate fans, buyback can have 6 or 7, introduced the surrounding relatives and friends to buy

It's really good for the smell Just change it once a year. Keep the box of the purifier so that it can be sent back to the factory

There are many users who remove the odor, which shows that a large part of people face the odor problem in our life

Is a very common life problem, but when it comes to air purification we can't think of the odor problem And this little cutie, which is very effective for people who are allergic to pets It's good for both owners and pets

One has been installed in every department of the hospital in Guangzhou. It has been in use for two years and is very stable

(Purifier is said to be used in the disinfection cabinet) The data is true, and some users have tested themselves, and the effect of formaldehyde is really fast 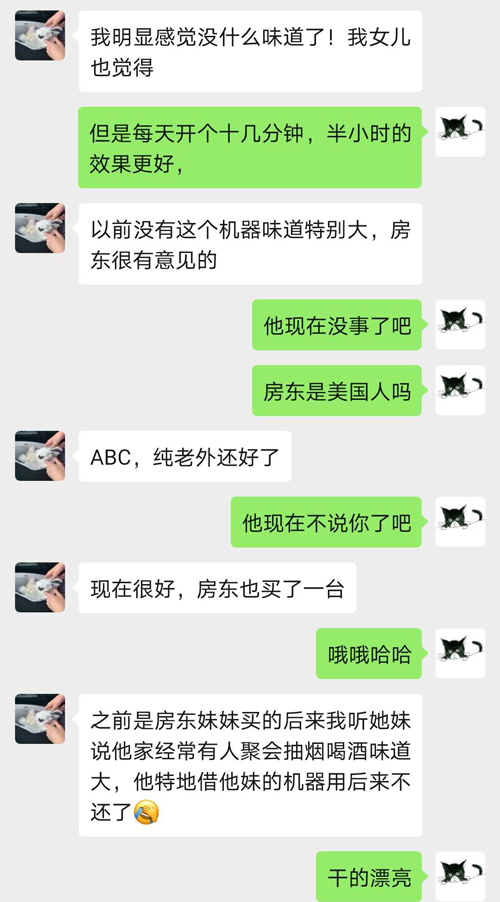